Fourth of July went off with a soggy bang.  Many many bangs... so many, in fact ... I got bit by the bug and bought a couple boxes of exploding chinese gunpowder balls.

And I liked it XD


Pretty sure Big Steve's Fireworks bent me over the table while I was trying to hastily check out... my fault really; I should have double-checked the charged amount and questioned it.  But when you have a 4.5y/o who's touching and grabbing everything around you, despite your repeated attempts at correcting his actions... you tend to not pay attention to other things and that's when the checkout lady decided to strike.

Saturday was met with decent temps (72F/22C) and friends over for a bbq.  Kids enjoyed the water balloons & the pool.  Parents enjoyed the music, food & beers.

Sunday, Nick was introduced to his new bicycle.  He was very excited :) His interest waned quickly though; i'm hoping i can encourage him back into it as the weather warms up and his practice gets better. 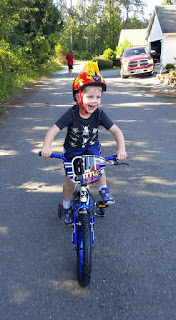 Monday started off wet, breezy and considerably cooler than previous days.  We went downtown for the 4th of July parade and got decent seats (1.5hrs early) only to be rained upon for 20min before the show started.  Once it started, however ... only the odd droplet or two graced our heads. 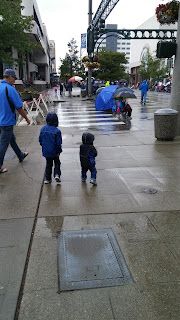 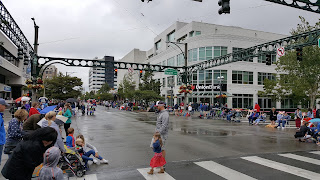 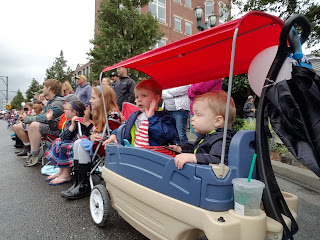 After some naps in the afternoon for the boys, we started getting dinner prepped and building anticipation for the evenings' festivities.

No pics of the fireworks, but they were grande.  And while Nolan slept through it all (what a trooper!) Nick was scared about the "big" fireworks, but was happy with my lil screechers and popits.  After some convincing, he finally protested quietly enough for me to light off the first of our larger payloads.  Well, he sure liked those :)

Nick went to bed shortly after we finished ... the fireworks,however, continued on into the night.  Most of them died off around 11:30/Midnight ... until some jack-knob decided to finish off his/her collection at 3:40am. Thanks, jackass.

God, I can't wait until next year... MOAR BOOM!